ARCADIAN-IoT will accelerate the development towards decentralized, transparent and user controllable privacy in three real use cases. One of them will be Emergency and vigilance using drones and IoT which aims to demonstrate the contribution of the Arcadian IoT platform to the emergency and vigilance scenarios.

This domain implements a Drone Guard Angel (DGA) service, that enable drones to track and follow persons walking from one place to another, on their daily activities, in city areas. This implementation supports a high-level scenario where a young lady who is on her way home after a dinner with friends. She is previously registered in the Drone Guard Angel (DGA) service, where she has supplied some of her physical characteristics, identity validation (picture, name), and the registration of her personal smartphone. After this dinner with friends, the young lady requests a Drone Guard, by authenticating herself in the dedicated App installed in her smartphone.

After receiving the service request with some of the requesting person data, a drone parked in a specific place in the neighbourhood lifts off and arrives near her. The first thing the drone does is to validate the user by communicating with its smartphone running the App, and face recognition. After the successful validation, the drone notifies her about the success of the recognition and the DGA is ready to guard her home.

She starts walking home, and the DGA starts following her, keeping track of her and detecting eventual threat signals nearby (e.g. rapid movements towards the user, high speed vehicles or objects), which are detected through AI models that process microphone inputs and/or image recognition to detect unusual movements in the nearby.

If something abnormal is detected, the drone can start an appropriate manoeuvre to scare or demotivate the attackers (blinking lights, emitting sounds, etc.), while it calls for rescue (police). If injuries are detected, a rescue team is called. While the rescue team is on its way, some details can already be sent, collected by the camera, microphone and appropriate sensors (e.g. GPS), to give precise location, or images of the attackers.

This domain of implementation covers trust, security, and privacy challenges, meeting the Arcadian-IoT objectives, such as: 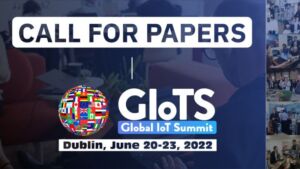 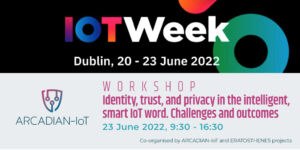 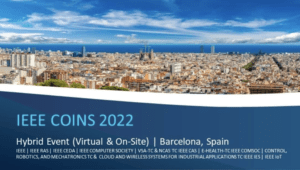 IEEE COINS brings together experts in Digital Transformation (from AI and IoT to Cloud, Blockchain, Cybersecurity, and Robotics) from around...
View Calendar
Cookies To make this site work properly, we sometimes place small data files called cookies on your device.
Accept